Special Report from Thinkum on the Business of Digital Dating 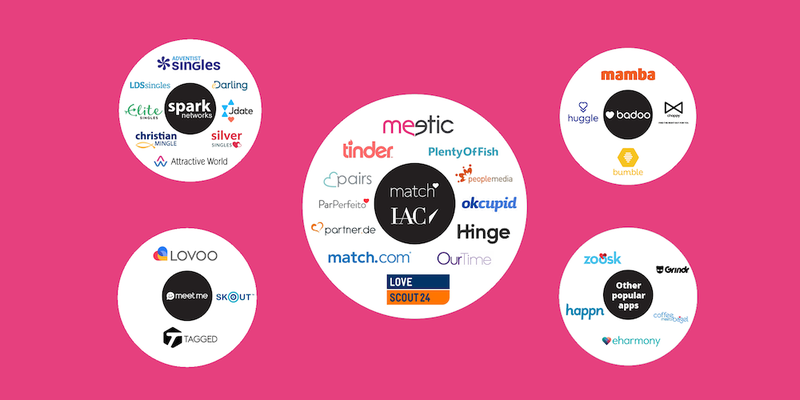 A few days ago, Thinkum Media published the article “The business of digital dating: A special report” which found very interesting and useful, thus we are copying it here with all legal rights reserved by Thinkum.

Love is big business. According to the National Retail Federation, lovers will spend more than $20 billion this Valentine’s Day on everything from flowers, to candy, to romantic dinners.

But millions of singles are still looking for that special someone. Most will turn to dating apps and sites in what is becoming a $12 billion business. It’s expected that more than half of all couples will have met online by 2031.

Because let’s be honest: meeting your next significant other in — gasp — the real world is so 2018.

There are dozens of dating sites and apps, but as it turns out, the majority of them are controlled by four conglomerates: Match, The Meet Group, Badoo, and Spark Networks SE. In this report, we take a look at how big they are and if they’re positioned for the future. But we also take a look at several upstarts that are giving the giants a run for their dating dollars.

So dig in, stop swiping left for a moment, and immerse yourself in the data of dating.

Match Group is a massive conglomerate of more than 45 dating services, including Tinder, Match.com, Hinge, Plenty of Fish (POF), OKCupid, Chemistry, and Twoo.

Match went public in 2015, and its majority stakeholder is IAC. IAC was originally Silver King Broadcasting Company, a collection of local TV stations. It now owns hundreds of brands in hundreds of countries.

Match Group reportedly attempted to acquire upstart Bumble in 2017 for as much as $1 billion. The acquisition attempts resulted in lawsuits. Meanwhile, Tinder co-founders also sued Match, claiming that it was undervalued during 2017 mergers.

Tinder changed the dating app game with two major innovations. First, it forced users to log in with Facebook credentials to assure users were real people. Second, it introduced the swipe gesture as a play on the “hot or not” theme. Within months, millions of users were swiping away. Tinder’s popularity is slowly becoming its own worst enemy, as usage is in a period of decline as users look for alternatives.

Before there was Tinder, there was a dating site that gave Match Group its name: match.com. The site remains relatively popular, with usage ranks in the top 1,000 via Facebook login data. It’s a somewhat older-school site, application, and user base, but it remains an iconic and trusted brand in the dating space. That said, it’s showing its age in every way.

OKCupid’s more straightforward approach to dating apps remains popular, and the app — especially its latest version — receives positive reviews on both the Apple App Store and the Google Play Store. It’s likely benefitting from what appears to be a slight Tinder exodus while at the same time adding Tinder-like features, including swiping.

Match is still in it to win it

Despite aging apps and communities, it’s clear that Match remains committed to remaining at the top of the digital dating game, especially when it comes to innovating with new apps that feature novel mechanics. Hiring at the company has been on the rise as of late, mostly due to an influx of “campus ambassadors” for a new dating app called “Ship” that introduces a fascinating, if terrifying, new mechanic: friends swipe right or left for one another rather than for themselves. 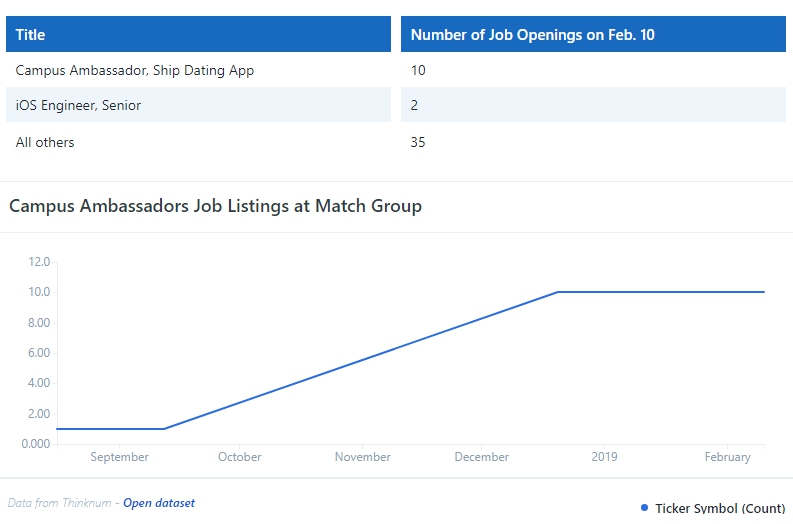 myYearbook was once a website that sought to reunite classmates via online games and chat rooms. Founded in 2005, it quickly built a massive following until its acquisition by Quepasa, a Latino social network in 2011. In 2012, it changed its name to MeetMe, acquired mobile meeting and chat app Skout in 2016, and rebranded as The Meet Group in 2016. In 2017, it acquired German dating app Lovoo.

Although the company’s stock is in somewhat of a freefall lately, the three apps that define its presence in the dating world are around or within the top-500 most used apps via Facebook login. For comparison’s sake, Match.com’s ranking was over 100 places below Tagged on February 7, 2019.

The company is also heavily investing in the video for its other ventures, which is currently raking in millions per month in revenue. As a younger company within the space that’s experimenting with new tech, Meet looks to be a dark horse in the race for the title of top dating app company.

However, employee sentiments at the company are on a decline, as we detailed yesterday. 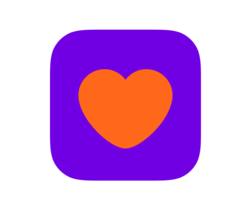 With some Facebook growth hacks and a mobile app, it quickly became one of the most popular dating apps in the world outside of the United States. It acquired dating app Huggle in 2016, claims to have almost 400 million members worldwide, and now employs nearly 600 people.

It is also ramping up hiring efforts, especially in Moscow for backend developers.

While making Badoo into a Russian dating empire, Andreev built Bumble with Tinder co-founder Whitney Wolfe. He was named to Forbes’ global list of billionaires for the first time in 2019, and his current net worth is estimated to be $1.5 billion.

We’ve seen Bumble rise through the Facebook App Active Users ranking steadily over time, in what could be them taking a slice of Tinder’s (and parent company Match Group’s) pie.

Bumble on the rise

With a different way of matching users, that’s more female-friendly — Bumble requires that the woman must message back within 24 hours of matching in order to keep the match — it seems Wolfe and the Bumble team continue to find a way to increase their market share in the industry.

And, with a 79% stake in the company, Andreev and Badoo have to be thrilled to see it thrive.

Way back in 1997, MatchNet founder Joe Y. Shapira launched JDate.com, a website on which Jewish singles could find one another on the burgeoning World Wide Web.

By 2005, the company was renamed Spark Networks, with control of Christian Mingle, Single Parent Mingle, SilverSingles, and others.

Despite being first to market, free dating sites and apps put the squeeze on Spark’s profits. Even with hundreds of millions of dollars put into advertising campaigns, the company failed to earn more than it spent. In 2017, it merged with Affinitas GmbH to form Spark Networks SE with its headquarters moved to Berlin.

JDate is a dating industry stalwart: it’s the place to go for Jewish singles looking for a match. That said, the app has struggled when it comes to user reception due to its age and clunky interface.

Christian Mingle, the new-testament version of JDate for Christian Singles, has done well in the past as a place for people looking for like-minded singles. However, with a Facebook follower count that has not only plateaued but is declining, this audience is beginning to look for love elsewhere, such as the next church pew over.

Launched in 2000, eharmony is almost as iconic in the dating world as match.com and JDate. It was launched by clinical psychologist Dr. Neil Clark Warren, who created an in-depth user questionnaire about users’ beliefs and values that he claimed made the dating service more accurate when it comes to finding compatible mates. It is, in many ways, the methodological opposite of Tinder.

Founded in 2007 by two Iranian immigrants, Zoosk is one of the largest and longer-standing privately-owned online dating service companies, offering its services in more than 80 countries.

Zoosk is within the top-350 apps that use a Facebook login within Facebook’s entire service, which might be due to the company’s global reach.

In order to maintain success, Zoosk had to overcome a few roadblocks; its founders left the company in December 2014, it failed to IPO in 2015, and in 2016, it slashed a third of its headcount.

Most recently, the company is trying to tackle the beast that is catfishing and dating scams, launching a service — Insignia — that confirms certain users as military members.

But, even with all that, Zoosk was able to become one of the top-dating apps in the world today as seen through the data and did so without any major funding rounds since 2012.

The story of Coffee Meets Bagel revolves around the Kang sisters: Arum, Dawoon, and Soo. These three South Korean immigrants famously went on the show Shark Tank to pitch their company, touting the service’s ability to make matches based on users’ friends of friends on Facebook rather than throwing singles into the pool of, well, sharks.

After rejecting Mark Cuban’s offer of $30 million for the whole company, the Kang sisters continued to grow Coffee Meets Bagel. It even got an investment from Peng Ong, the co-founder of the very company the Kangs’ thought Coffee Meets Bagel could be as big as Match.com.

Today, Coffee Meets Bagel continues to grow from a company standpoint, opening an office in Seattle and investing more in human capital, or in other words, hiring more. 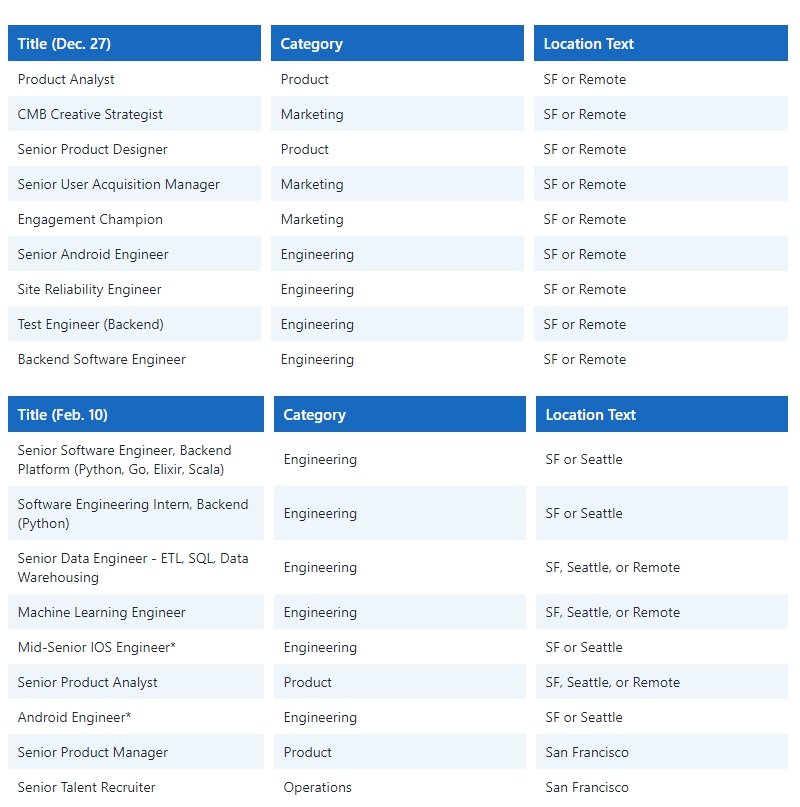 Today, the company has foregone Facebook (slightly) by offering users a way to sign up for the service using a mobile phone. Despite a Valentine’s Day data breach, the company’s way of circumnavigating Facebook differentiates it from the pack, and it could be on its way to chasing the big players of the industry.

When Grindr launched in 2009, it changed the dating app world. First, it was one of the first high-profile dating apps intended for gay men. Second, it used smartphone’s at-the-time novel geolocation features to allow daters to find nearby matches for an impromptu hookup. It was received extremely well, winning the “Best Mobile Dating App” award at iDate 2011. It launched Blendr for straight people in 2011, had 27 million users by 2017. Grindr went public in August 2018 via the app’s Chinese parent, Kunlun Group, who purchased a 61.5 percent stake for $93 million in 2016.

One major caveat for Grindr, despite its popularity and early success, is that hiring appears to be waning at the company. Back in 2017, hiring was relatively healthy at its Los Angeles headquarters. However, hiring has stalled a bit in early 2019. It also recently shuttered an editorial operation and laid off its entire staff.

Like Grindr, Happn uses location data to match nearby users. Didier Rappaport launched the app in 2014 for Android, iPhone, and Windows and by July of the same year, had over 40,000 users daily. By 2016, the app had a reported 10 million users.

Those exploding user numbers are reflected in the number of reviews the app gets on the Apple App Store. A healthy uptick in review count is a good indication of an involved user community, and that’s good for Happn’s future. 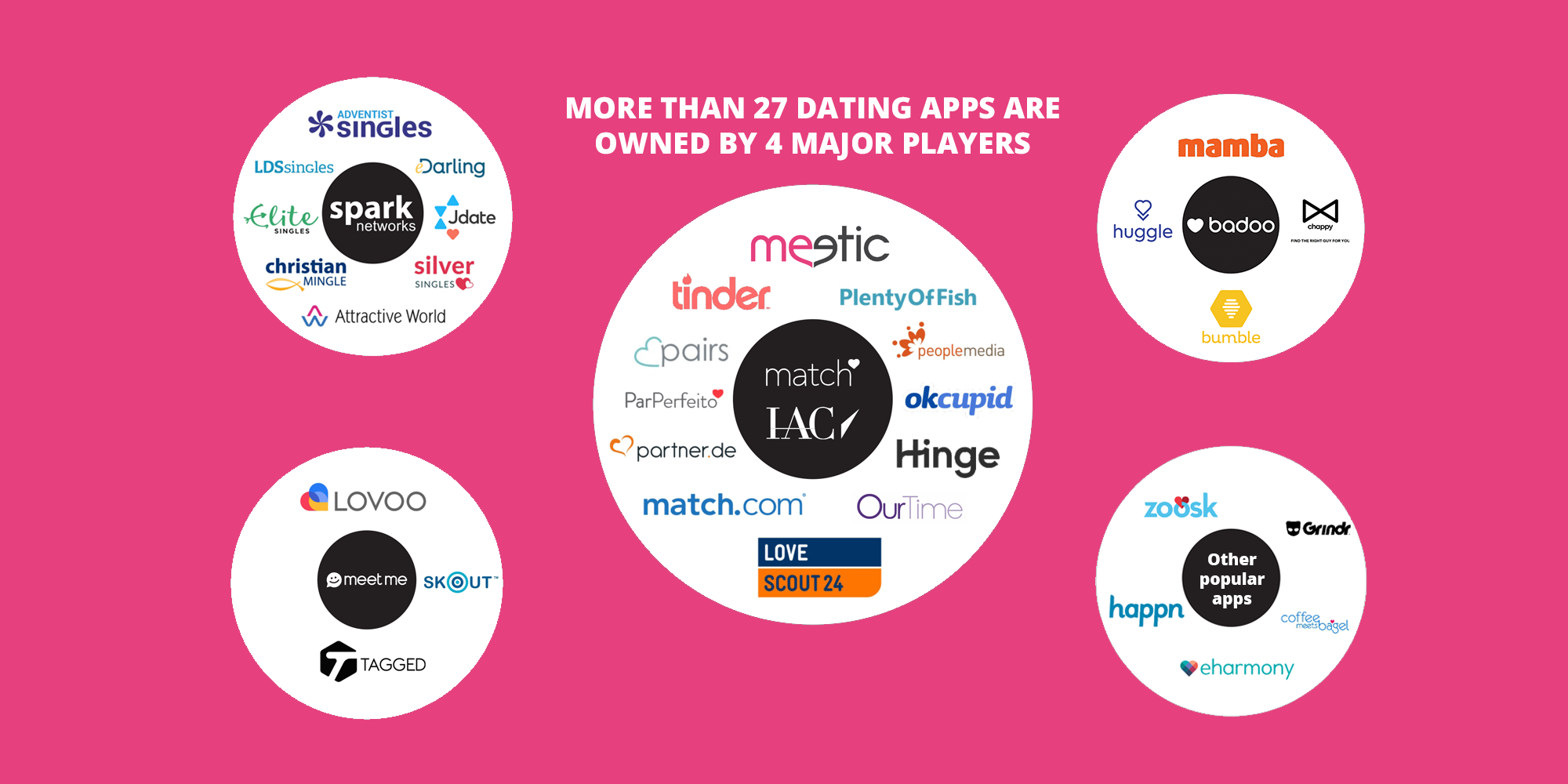 This article is the copy of the Thinkum’s “The business of digital dating: A special report“. All legal rights reserved by Thinkum.