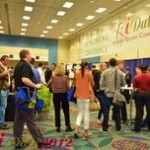 In addition, I really enjoyed multiple lectures this year. There were four (!) tracks running at the same time only for dating part of the conference, plus one track for social networking conference. I wish there were more people from Pilot Group with me…

I learned a lot at dating mobile apps session. Dating algorithms panel turned to be a heated debate about matching standards, science behind compatibility and purely matchmaking scripts. Search engines panel from Google and Bing highlighted a lot of opportunities for internet dating promotion. I should say, Bing’s presentation blew Google’s away: new social aspects in search results distribution, possible options for promotion at Bing excited all the delegates and produced a lot of questions.  Traditional online dating industry overview for 2011from Mark Brooks was a standing room only.

The best thing was that almost 80% of attendees this year in Miami were new faces. There was a special networking session in exhibit hall during networking break, which allowed me to meet more people in 10 minutes, than I could possible talk to during 3 conference days! Sponsors and exhibitors were payment systems & mobile payments, mobile applications, affiliate networks, white label dating platforms, dating consulting services, analytics software solutions and anti-scam systems. I met some Dating Pro partners in Exhibit Floor, like Skrill (former Moneybookers). This payment system will be available soon as a part of Dating Pro software package.

Every day there were networking events for all conference attendees. It was exciting! Pre-event party was on a rooftop of a hotel. The next night there was a long-awaited iDate awards reception. Reminder: Dating Pro was nominated in “Best Dating software provider” category. We did not win, but the ceremony itself was fun: many influential people in dating industry were giving out the awards. It was an excellent networking opportunity for me. Final Panel debate covered acquisition opportunities for smaller dating sites, new trends in dating industry, various niche dating markets.

I did not go to Buyers and sellers session as providers are not allowed there. But I saw a lot of people looking to buy or sell a dating business in a room speed networking. I had a chance to visit post-conference though. It excelled my expectations! It was the first time startups actually presented their business models, got questions and opinions from the audience. I was very happy that one of Dating Pro clients was presenting his new dating site. Last but not least, there was an iDate Cruise – a networking and more relaxed 4-day trip.

I’m back now. iDate conference in Miami exceeded my expectations this year: I came back with a lot of new business contacts, new prospects and a lot of new information about dating industry trends.