DatingPro  »  blog  »  Development and growth   »   Online dating market overview: how much dating applications earn and what are their business models. Part 2

Online dating market overview: how much dating applications earn and what are their business models. Part 2 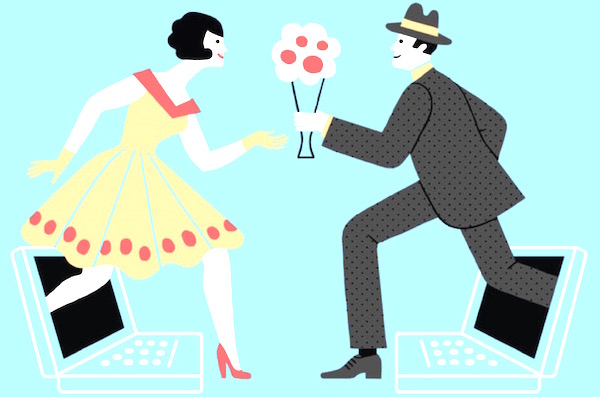 Today, we’ll continue with the online dating market overview. In the second part, we’ll learn about the target audience of dating sites/apps. how they earn money, trends, and prospects of the dating market and, finally.

Target audience of the dating services

In 2017, ‘Kaspersky Lab’ and research company ‘B2B International’ had conducted a survey among 6458 online dating users from 30 countries and compiled an average portrait of a person who searches a date through the Internet.

Such a person is most likely to be a 33.8-year-old, male and full-time worker (63%). Otherwise, it’s a middle manager (20%) or a highly qualified specialist – a scientist, teacher or engineer (19%). Heads of companies and business owners make up 11% of online dating users.

In the course of their research, ‘Kaspersky Lab’ and ‘B2B International’ have found that finding a partner is not the most common goal among users: 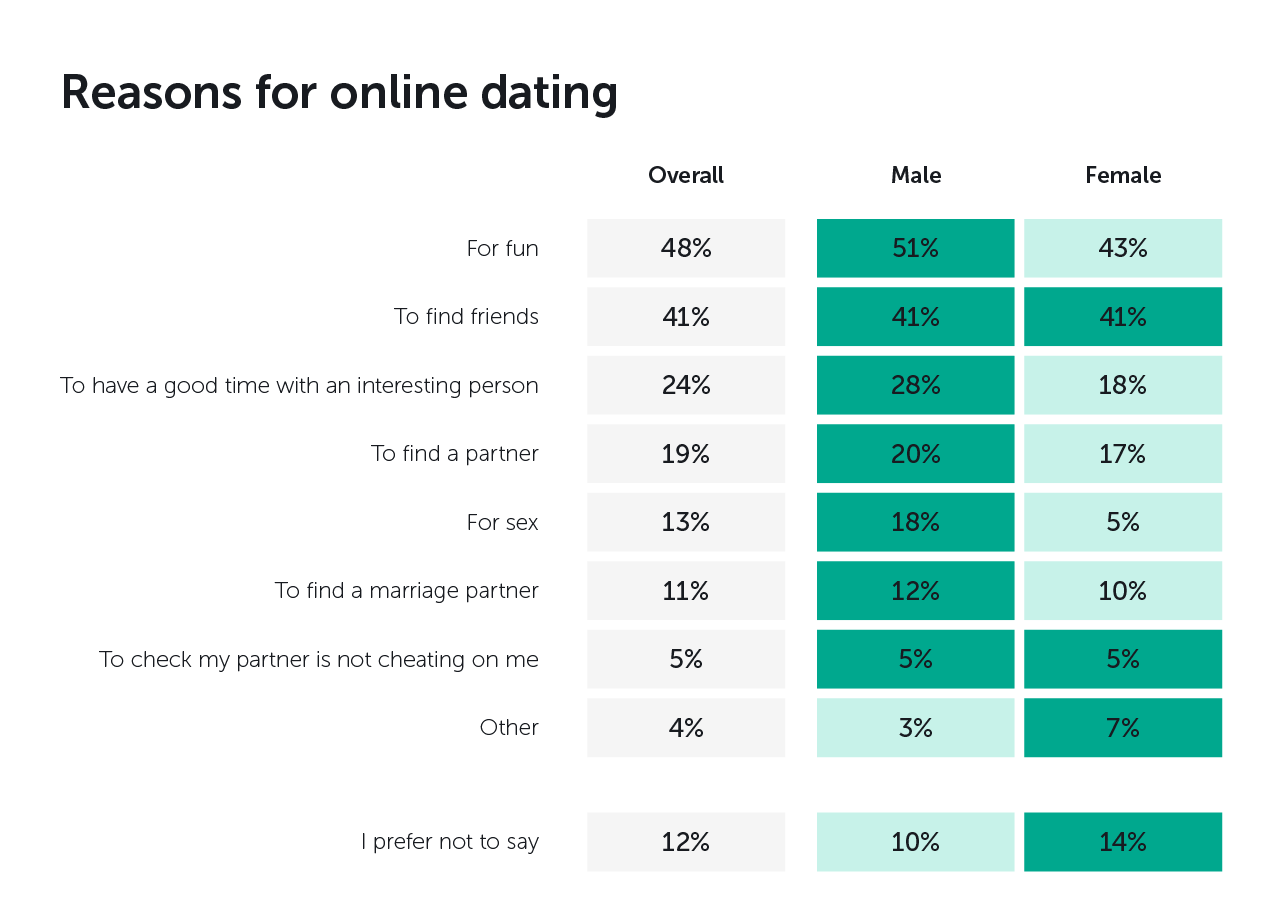 They also noticed that 57% of surveyed users lie about themselves, most of them (67%) were married men.

Online dating statistics show that 20% of those who are now in a serious relationship, started them online. And according to the ‘Match Group’ 600 million single people have access to the Internet all over the world, and 400 million of them have never used the dating app.

Geographically, a large part of the online dating sites traffic falls on the United States – 62.9% in total. The second place is occupied by the UK with 7.34% of traffic. 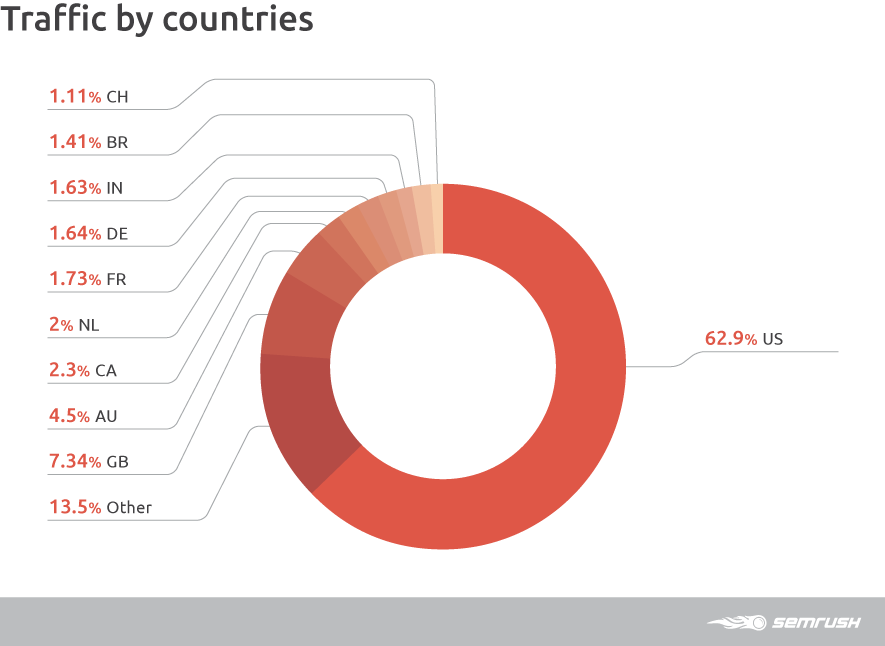 The monetization in this area is divided into four main categories: paid subscription, freemium, advertising and premium accounts.

The fee may be regular, monthly, or one-time, from today onwards.

The subscription fee system is implemented at the Match.com service, where access to the site for a month costs $40.

One-time payments for the entire period of use are less common.

Free use of the main features and additional options for a fee. Another option: earnings on ads in exchange for free use.

The main reason behind the freemium model is to spread information about the product and increase user loyalty.

Paid services are usually divided into two categories: the first is to promote your profile, the second is to expand the functionality of the system, also called ‘VIP’ groups or statuses.

The owner of the app or site accepts ads from third parties, places them on its platform, and earns on clicks, views or transactions.

There are, for example, souvenir and gift shops banners or contextual ads, flower delivery services, plush toys or underwear, and etc, the possibilities of advertising are not limited to only these areas.

Sometimes the basic features of the service are available only after joining the user club.

According to Joanna Glasner, a reporter for Crunchbase News, venture capital investors invested $ 127 million in 27 dating startups around the world in 2018.

Almost 80% of all investments in the dating sphere in 2018 went to a single company – the Chinese application for homosexual men called ‘Blued’, made in the Grindr-like style.

While in 2017, it was the Chinese mobile dating app Tantan that collected the biggest part of the investments, and in 2014, the Beijing dating site Baihe collected $ 250 million.

The Chinese market is very closed, it’s basically a separate Internet network. And it’s difficult for global dating services to enter it.

As a result, there is a field for growth as the audience is not yet spoiled. But the market is quickly globalizing, although there are still emerging new niches.

As a rule, dating services are presented in local markets, and project scaling is time-consuming and expensive. This is usually associated with increased marketing costs since there are quite a few competitors.

For beginners in the online-dating industry, it’s recommended to start with a niche and develop a product that will solve the “pain” of a particular audience – a particular age group or people with a common hobby.

Entrepreneur and investor Andrew Chen states that finding investments for dating startup is hard mostly because of the inevitable outflow of users and the high cost of attracting an audience, as well as:

Trends and prospects of the industry

Vanessa Tao, the author of the Hong Kong digital marketing blog, notes three trends in the online dating industry that the market is aiming for:

Today, the availability of gaming and entertainment components in an application or dating site is crucial for users. The most obvious example is Tinder or Badoo with their “swiping” features. “Such interaction with the service is perceived as a game, without the stigma of marriage service,” says Vanessa Tao.

“Niche services for dating today are rapidly conquering the market, and if the site owners cannot offer the users something unusual, unique, they leave. While Tinder attracts a mass market, Bumble, Grindr, and Happn are prime examples of positioning and segmentation of dating applications, ”writes Tao.

Not all market players share this position, some do not believe in the economic success of narrowly segmented startups.

Even when it comes to finding a partner for a serious relationship, users are always looking for a simple, intuitive and user-friendly interface in the dating application.

One of the reasons for the success of Tinder is that users can simply import their Facebook profile into the app, without having to fill out those long questionnaires. Integration with social networks helped Tinder to attract the critical mass needed for its work.

Transition to the mobile market

Another important trend in the online dating industry is the transition of the audience to mobile platforms.

Here the main trend is to solve the user’s problem as quickly as possible. In this case, those services that catch global trends win. For example – users actively use stories on Instagram — streams immediately appear in many dating services.

Judging by the trends in the US market, it can be said that the line between online dating and social networks will continue to blur. Facebook is testing its Secret Crush Dating, in Tinder users leave links to instant messengers and social networks.

Start a Dating Site: What You Need to Know About Dating Business Before Launching

Why Are Dating Sites More Effective Than Traditional Methods?

Online dating has become a popular trend over the years. [...]
Switch to user mode Switch to admin mode